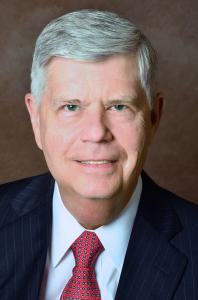 Mr. Austin is Of Counsel to the firm.  He focuses on real estate, business law, banking law and related civil litigation. He is a member of the Illinois State Bar Association, American Bar Association, the Illinois Real Estate Lawyers Association, and the Effingham County Bar Association.  He currently serves as Chairman of Attorneys’ Title Guaranty Fund, Inc., a bar-related title insurer.   He is a founding director of ATG Trust Company, an independent bar-related trust company, where he served as Chairman from 2001-2005.  Mr. Austin is a member of the Illinois State Bar Association’s Real Estate Section Council, Senior Lawyer Section Council, and its Standing Committee on Military Affairs, which he previously chaired. He is a Fellow of the Illinois Bar Foundation. He served several terms as an Assembly Representative in the ISBA, and served on the ISBA’s Mineral Law Subcommittee. He holds a Martindale-Hubbell AV peer rating, and is recognized in Leading Lawyers.

Mr. Austin is a former Assistant and Special Assistant Attorney General. Mr. Austin serves on and has held leadership positions on several corporate boards, as well as on several local, state and national not-for-profit boards.  He retired in 2001, following more than 30 years of military service, as a Brigadier General, AUS.